It’s Okay to be bLU sometimes

Have you ever felt different? Wondered if you were the only person who thought and felt the way that you do? Found yourself speaking to friends and family about energy, holistic health, or repairing your timeline, only to be met with looks of bewilderment or hidden eye rolls?

My girlfriend is a Reiki Master and practices Shamanistic healing. My Mother reads tarot cards and talked me into having my tea leaves read when I no more believed in mediums than time travel.

I’ve since learned that even time travel is possible, as relates to us going back and repairing aspects of our own timeline, and maybe even that of previous life timelines.

For most of my life though, I truly believed that if I couldn’t see or touch it then it didn’t exist. Many of my more ‘practical’ friends still feel that way.

This is perhaps the biggest reason, when students of my Speaking Program started noting their frustration that they couldn’t find many stages where they could speak to the general public, and fully embrace, or share, their inner ‘woo woo’ in that capacity, I began to contemplate.

As a speaker of 18 years who has spoken at numerous branded speaking events, someone who started out very practical in my beliefs, and someone who has operated many events myself, I realized I might be in a good position to launch such a branded series.

After careful consideration, many conversations with my girlfriend and my high-performance coach, bLU Talks was born.

In direct response to the calls for a stage where they could share their inner woo woo, a major part of the bLU Talks brand became the U in bLU.

bLU stands for Business, Life, Universe and the U, the Universe part of the name, represents all things we might otherwise call New Age – and often things we can’t see or touch.

With my practical nature, and love of stories, I felt the Business and Life parts of the brand were also highly important and that is why the three together to me make the perfect blend.

The result is that on a bLU Talks stage, or in our upcoming podcast or book series, you will see stories about life, business messages, and New Age themes all taking equal stage.

And that is exactly what happened during bLU Talks recent visit to the Harvard Graduate School of Education.

14 speakers in all took that stage on that day, November 23rd, to talk about the themes ranging from what they don’t teach you in certain schools, to the power of synchronicity, to how to create world-class customer experiences, to embracing chaos, to the Akashic Records.

The result was, I believe, the perfect blend of business, life, and universe.

And sure, as with most events, there were some technical hiccups.

Yet, unlike most events, I also believe there were lifelong relationships built and people walking away describing the experience as one of the best in their lives.

I have been profoundly impacted by what I’ve heard at the events, and I have been running events off and on for almost 20 years.

And we haven’t even officially launched yet. On a side-note, I can’t wait for you to see Emily's bLU talk.

So bLU Talks aside, why is it that we have so much trouble believing in what we can’t touch, or see?

And is it worth the effort, trying to demonstrate to someone in our life that there may be a world beyond our eyes?

I believe it is. Here’s why.

I battled generalized anxiety and hypochondria for roughly four years in my twenties. The traditional medical community couldn’t provide any answers. I was becoming a burden on the traditional system by my frequent visits to waiting rooms, wondering if I might have a coffee cup in the back with my name on it, I had become such a fixture at times.

Just like when someone is practicing Reiki on me, I can’t see it. The same with Acupressure. The same when they are accessing my records. I can’t physically touch my records, and yet, it is these exact unseeable, untouchable (although many empaths will describe their ability to see and touch what I still can’t) modalities then continue to heal me in the most significant of ways.

Further, on a daily basis, somewhere in the world, perhaps thousands of people, are also being healed, or at least receiving relief, from something they can’t physically see or touch.

Imagine if just one new person each week in our own lives discovered the power of what they can’t physically see or touch? Imagine the lives that could be impacted if we could simply help one more person a year discover the healing power of what we otherwise call New Age?

Now the question becomes, how do we do it without forcing our beliefs on someone else? Personally, I feel the wrong way to do that is to try to question their current beliefs, or aim to trick them into believing, or to manipulate them in some malicious way. In fact, if you offer them this new perspective and they say, ‘sorry, not for me,’ except that it may not be for them. If they ask, however, what is this Reiki-thing I hear about, or do you believe in distant healing, then this is perhaps a perfect time for you to share your discoveries with them.

Now back to how do you do it? I believe you need to meet them where they are. I still struggle with certain aspects of believing what I can’t see, and so if I’ve come this far and still struggle, you can only imagine how hard it is for someone who has never believed in anything beyond their eyes. Meeting them where they are, to me, means demonstrating in practical ways that life exists beyond our touch.

I’m getting ready to release my new book called The Book of WHY (and HOW), and in the book I talk about how I began to believe in energy, and then later helped others see that there has to be something to it. To do this I talked practical experiences that demonstrated energy exists beyond our exertion of said energy.

I described experiences of walking into an elevator, and even though the couple wasn’t fighting or kissing while I was in the elevator, I could feel the energy that they were doing so before I entered said elevator. I talked about watching in amazement as person after person held a newborn baby, and yet the baby only cried when one specific person held the newborn. I spoke about the time my Mother’s dog wouldn’t let a certain man into her yard, despite never protesting when any other person visited her, and how the dog would never let the man in her yard no matter how many visits. If this isn’t proof of energy in action, I don’t know what is.

I discovered the more I spoke in practical terms with people who didn’t believe in what seemed impractical to them, the more they started nodding their heads and opening up to what may be possible, and/or may exist beyond their touch.

This is a full-circle moment to state that it is my hope, in some small way, that bLU Talks moving forward helps enlighten more people about what may be beyond their eyes and touch, so that more great healing can begin both physically and, in the world, at large.

And that is why I feel it’s okay to be bLU sometimes. 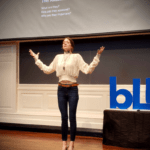 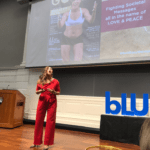 Truly, one of my favorite experiences from this adventure was meeting one of my mentors, Corey Porier, in person. Corey and I have been working together for several years, developing an awesome professional relationship and witnessing huge personal life-shifts in each other. Since I’ve known Corey, he’s become a best selling author, an internationally renowned speaker, NEW FATHER, and most incredibly, I’ve watched as he started a movement. This guy knows what’s up...Congratulations, Corey!