Parents Surviving Puberty: When the Shift Hits the Fan

It happened for the first time the other night. My 12 year old did not request a tuck in. Instead, he just announced, “I’m going to bed.”

“And I’m out of deodorant.”

Well, hold the freakin’ phone! What in the sam hell is going on here? (I may or may not be in denial that my oldest child is making the transition into adulthood.) 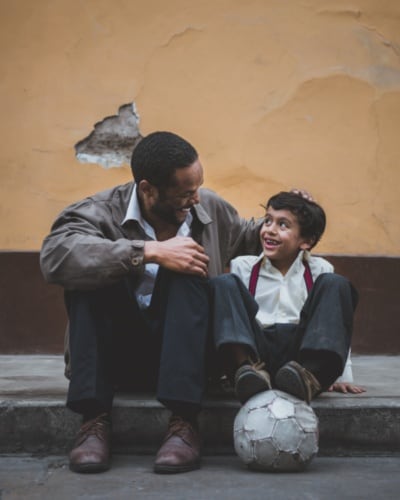 The signs have been present for a few months now…spending more time alone, talking privately with his friends, asking constantly for his own room, being extremely pissy and intollerant with his siblings, legs and arms longer than Inspector Gadget…I guess I should have seen this coming. But, when he didn’t need me to tuck him in, it became all too real.

Apparently, I’m not the only one to notice the “shift”. It’s wreaking havoc on my middle child too. “Mom, I’m depressed that Jack isn’t interested in the same things we used to do together. I feel like something is missing in my life. I’m feeling depressed.” Uh, how old are you again? You sure you haven’t moved into adulthood too, while I wasn’t looking? Are you out of deodorant as well? For the record, this kid is 9 going on ancient.

Oh man, I’m so out of my league with this…I feel like I’m about to ski the double black diamond. I need a puberty helmet.

So, I do what I always do when I don’t know what to do. I open my own Akashic Records, or the realm of consciousness that holds all information in the Universe, my own private internet of sorts, and I ask for guidance.

ME
Okay, Masters up here in the Records. How can I steer us all through puberty with some love and compassion?

AR
Perhaps you want to take inspiration from the Hopi Indians.

AR
More like understanding this time in a child’s life the way this tribe understood it. The Hopi would conduct an anointing ceremony. Granted these ideas can be adapted to fit a modern life style, but the purpose was to unite the community in understanding and honor for the rite of passage into adulthood.

ME
Oh, well that already feels different that being embarrassed and us all ignoring the elephant in the room. Tell me more…

AR
Taking a moment to just acknowledge and honor your son for the trials and tribulations he is about to experience on this journey, will help give him confidence and make him feel respected.

ME
Instead of feeling like a freak of nature? That sounds reasonable.

AR
The emotional swings that a child feels and acts on, generally produce a negative response in the adults around him. Since he is working on becoming an adult, and he associates adults as not approving of him, he may feel like he is not fit to attain this status. This can often leave a young person feeling like no one likes him, or he can’t do anything right. It has a very damaging effect on his self esteem.

ME
Wow, well that’s some great insight. I never thought of it that way. Perfect! I think I’ll start here then….Thank you.

Back to real life. And by real life, of course I mean video games. The boys are playing their devices when a matter of national importance unfolds. Someone has killed someone else’s sheep on Minecraft. All hell has now broken loose.

I hear the voice of a child I don’t quite recognize…oh wait, I do recognize that one, it’s Puberty Boy, scream, “London! I hate you!”

The mama bear/ cave woman emerges in me…no one talks to my ancient 9 year old that way…not even his brother.

“Get to my room!” I scream! (I have to send him to my room, because technically he doesn’t have his own room. Since he shares with the Ancient, the Ancient will of course decide he needs to change his underwear or something, at this precise moment, and will insist that it’s his room too, and he has every right to be there.)

So here we are, me and Puberty Boy, alone in my room. I begin by launching into a typical mom speech and I include a good old guilt trip that his younger brother is already feeling very sad about not connecting with him anymore.

Then the water works start. We have spun on an emotional dime here, moved from rage to sadness in zero to sixty, and I realize that we both need to take a deep breath. Jack is obviously distraught by the thought that he is responsible for alienating his own blood. I back off. I realize my mistake and that I’m doing the same thing to my blood, alienating him. I remember the wisdom from my session with my Records and I start over. I apologize and hug him. I talk to him about what’s happening in his body, that hormones are raging and these kind of explosive feelings are normal. I explain that becoming a man is no joke. It can be a difficult task, but I assure him that he has what it takes. I encourage him to learn to recognize the emotional swings and I make a strong point that even though he is feeling a surge of emotion, it’s not okay to verbally damage others. Maybe a walk, or some alone time would be a better choice. Since he’s getting older, maybe he would like to take a walk by himself and go get a Jamba Juice down the street. I’ll even give him the cash. It’s not exactly like going into the forest and slaying the bear, but it’ll do. I tell him that I believe in him, and that this rite of passage deserves some respect, as it’s not an easy thing to do, to leave your childhood behind and become one of us. He changes instantly. The tears dry up. He hugs me and says, “I love you, Mom. Thank you. Can we be done? I want to go tell London that I’m sorry and I love him too.”

“Nice,” I think… I remove my puberty helmet, satisfied with what I’ve accomplished for now. I follow him out of the room and head down the hall to go finish dinner…when my 6 year old jumps out of her room right smack in front me. I do something that resembles some drum circle dancing to avoid crashing into her and knocking us both on the ground.

She giggles and says, “Mommy, you’re funny… Can I have a bra for my birthday?”

I put the helmet back on….